You are using an outdated browser. Please upgrade your browser to improve your experience.

Henry operated this single store in Mulberry, FL for 16 years until, in 1920, his son Wogan bought the store from his father. Business continued to grow until the land boom/bust of 1929. The depression hit the country hard, and Badcock was no exception. Finding it increasingly difficult to sell the merchandise he had on hand, Wogan began to sell merchandise through consignment at various stores in the area, offering a share of the profits if they sold the merchandise. Wogan also established the idea of the route salesman, who would use small trucks, travelling designated routes, to sell the Badcock merchandise. This laid the groundwork for the dealer model, which is still the foundation of Badcock’s business model. At the same time, Wogan introduced the practice of selling furniture to customers on credit, and collecting on installment accounts from these customers.

Over the years, this consignment model and route sales evolved into the dealer operation that is still active today. These home-furnishing centers would receive and sell merchandise only from Badcock, and these dealers were able to finance their customer accounts with help from the W.S. Badcock Corporation. The principal of easy, fair credit was a novel concept at the time, and Wogan Badcock was a forerunner of the way that most merchandise transactions are handled today. 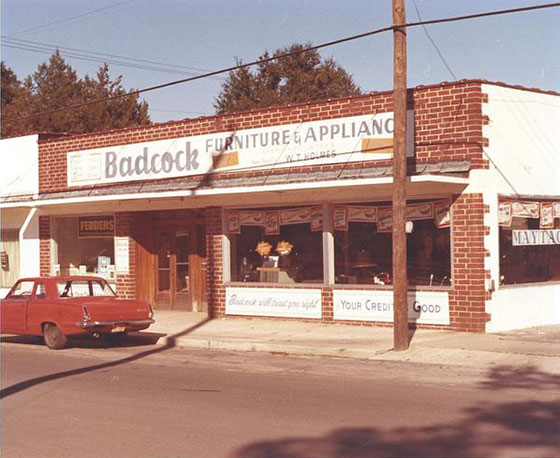 "My own experience was delightful - but only a few months ago - I was in the process of getting a homeless veteran settled into a new place and I went to Badcock to get him a few items to set up house - they were so nice and once I explained I was helping with a veteran - they even donated a couch to him!!! With a business that supports our veterans - is a business that I will support and send all my friends family and colleagues..... AND OF COURSE VETERANS! Thank you for all you do for our community" 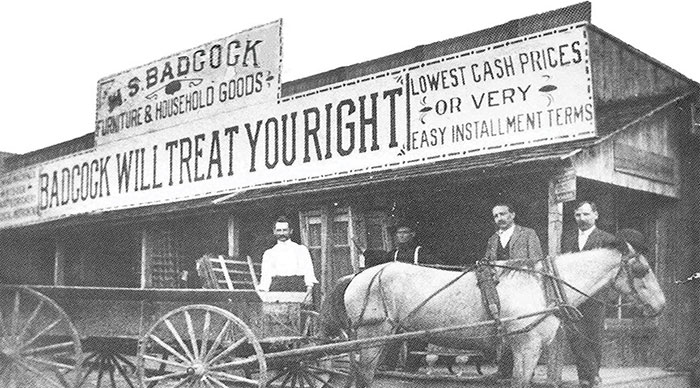 In the 1980's, growth continued with over 175 stores producing annual sales upwards of $100 million. As the store count continued to grow, so did the Badcock footprint. Badcock opened stores in South Carolina, North Carolina, Mississippi, and Tennessee.

In late 1999, the corporate image "and more" took on a whole new look and design. The traditional blue and orange logo of the 1960's was replaced with the logo that stands today. Badcock also launched the “Store 2000 Conversion Project”, which featured new storefronts and a more customer friendly, open-layout interior redesign. On March 7, 2000, the first Badcock &more retail store built from the ground up celebrated its ribbon cutting in Dade City, Florida.

In 2013, Badcock &more began working on the next refresh of stores, featuring new floor plans, interior colors, and a sleek new identity wall. Badcock still offers our affordable, easy credit terms and finances all of their own customer credit accounts at participating store locations, just as they have for over 100 years.

Badcock is driven today, just as it was in 1904, by providing customers with the color and style of home furnishings they want, at prices they love, by friendly sales associates, in an atmosphere that allows them to picture the furniture in their own home.

With the company continuing to grow, the future looks bright for the W.S. Badcock Corporation. On November 22, 2021, the company was purchased by and is now a subsidiary of Franchise Group Inc. (NASDAQ: FRG)

By delivering high quality products, and putting our customers’ needs first, the corporation has established a strong business plan, and a reputation for excellence in customer service, which will continue to fuel future growth and opportunities for the W.S. Badcock Corporation.

Our Stores Can Be Found

Contact Us to find out what we can do for you!

Badcock Makes It Easy to freshen up your decor.